I was looking on the USACO Monthlies today, and I noticed that the problem difficulties were missing from the problems. Below is a screenshot of the 2018-2019 USACO Silver problems; there should be a difficulty column between ‘Tags’ and ‘Module’. Has anyone else noticed this? 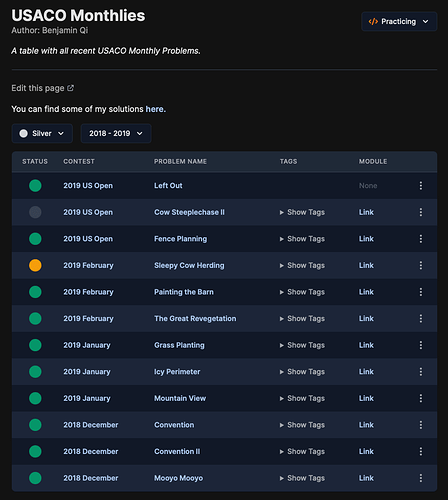 I don’t feel like they really need a difficulty. To be honest, I’m actually kind of against the difficulty ratings in general. I once solved two hard problems in a single sitting, then got stuck on an easy one for an entire day.

@rayfish We pushed a major change last night that may have impacted this. Were the difficulties there before today?

https://forum.usaco.guide/t/problem-difficulty-from-usaco-monthlies-missing/1086…/3 Most likely related to the problem refactor.

Btw @thecodingwizard, I noticed the solution hiding feature disappeared. Do you know what happened to it?

Also, I noticed that I lost some progress on the problems. Fortunately, I didn’t solve many problems, so I was able to fix the progress.

Do you happen to know which problem progress got lost? (Also in case this happened to anyone else – it’s theoretically possible to retrieve the lost data since a backup was made)

since the solutions are already hidden under three dots already, we just got rid of that option

Do you happen to know which problem progress got lost? (Also in case this happened to anyone else – it’s theoretically possible to retrieve the lost data since a backup was made)

There were four problems that I lost progress on, but I only remember two of them: USACO Silver MooBuzz and USACO Silver Left Out.

Oh, I think we forgot to migrate problem completion info for problems in the USACO monthlies table, oops

problem progress for other problems was migrated correctly right?

If anybody wants to manually migrate the data from the backup (which is somewhat involved) just lmk and I’ll walk you through it. It’s probably easier to re-mark them though.

Interesting, I thought there was a column named “Difficulty” that had the solve percentages. Maybe my memory is wrong…