Help with proof of Silver Why Did Cow Cross the Road No. 1

I read the given solution here:

And I’m trying to understand its correctness.

So here’s what I’ve come up with. Suppose we run the algorithm and then suppose this is not a maximal result, and then show a proof by contradiction.

cow and match them? But the algorithm would have found that chicken when it first ran.

The other way we can have an unmatched cow U is that at least one matched cow M has a choice of chickens, H1 and H2. In the algorithm we chose a chicken H1 that could have also been matched with U, and then H2 is not within the time range of U so we don’t have the option to match U. We lost the opportunity by choosing wrong with M. 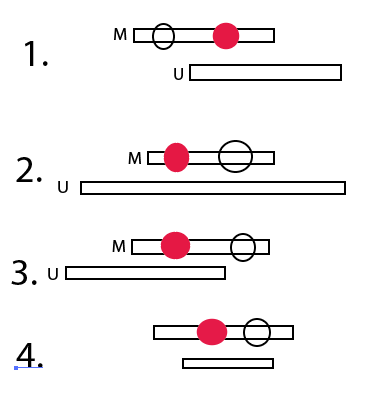 The four cases in the diagram show the four ways that U can overlap with M, given different lengths and positions of U.

Case 2 is also a contradiction because it would leave an unmatched chicken that would have been picked up the first time the algorithm ran.

Case 3 is a contradiction: it would have matched the earlier red chicken with U first, because U ends earlier than M.

Let me know if I’m track here or if there is some simpler way to express this.